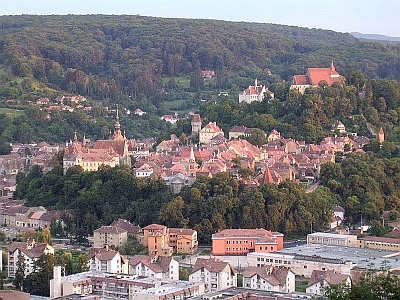 Sighişoara is considered the most beautiful and well preserved inhabited citadel in Europe, with an authentic mediaeval architecture. In Eastern Europe, Sighişoara is one of the few fortified towns which are still inhabited.

SiGHISOARA'S recognition as a "Mediaeval Jewel of Romania" and subsequent award by the 2009 Swiss Tourism Awards (STA), should considerably enhance the city’s notoriety and attractiveness as a historical destination.

Founded by Transylvanian Saxons during the 12th century, when it was known as Castrum Sex (Fort Six), it was further strengthened and extended in the 15th century. The name must have existed long before, as the Saxons built their walled town on the ruins of a former Roman fortress. In 1298, the town was mentioned as Schespurch, while in 1367 it was called Civitas de Seguswar. The name of Sighisoara was first noted in a written document, issued by Vlad Dracul, Vlad the Impaler's father, in 1431.

In the 14th and 15th centuries, the economic growth recorded by Sighisoara's industrious craftsmen and tradesmen ensured financial means for the construction of a strong defense system provided with 14 towers and several bastions provided with gunnery directed to all four cardinal points. Each tower was built, maintained and defended by a craft guild. Among the most visited is the 14th century Clock Tower. This tower controlled the main gate of the half-mile-long defensive wall and stored the city's treasures. 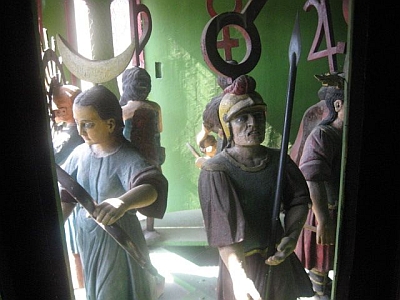 The city played an important strategic and commercial role at the edges of Central Europe, for several centuries. Sighişoara became one of the most important cities of Transylvania, with artisans from throughout Western Europe visiting the settlement. The German artisans and craftsmen dominated the urban economy, as well as building the fortifications that protected it. It is estimated that during the 16th and the 17th centuries Sighişoara had as many as 15 guilds and 20 handicraft branches.

His house is just one of the many attractions here. for magic atmosphere. It is also the birthplace of Vlad Dracula,also known as Vlad Tepes (Vlad the Impaler), ruler of Walachia from 1456 to 1462. It was he who inspired Bram Stoker's fictional creation, Count Dracula. 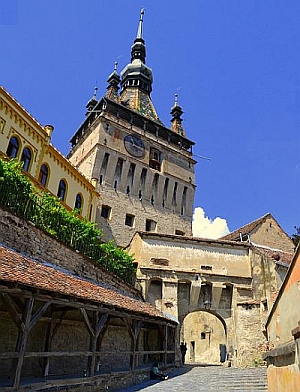 For several centuries, Sighisoara was a military and political stronghold. During the 14th - 16th centuries, craft guilds erected towers around the citadel walls to protect the town from Turkish raids. Laid out on two to four levels, the towers stored ammunition and food supplies and were provided with firing windows for cannons, shells and arrows. Of the original fourteen towers and five artillery bastions, nine towers and two bastions have survived the test of time: The Tinsmiths' Tower - still shows traces of its siege in 1704, theBlacksmiths' Tower (Turnul Fierarilor), Butchers' Tower,Cobblers' Tower, Furriers' Tower, Ropemakers' Tower,Tailors' Tower, Tanners' Tower. The ninth tower still standing is the Clock Tower itself. 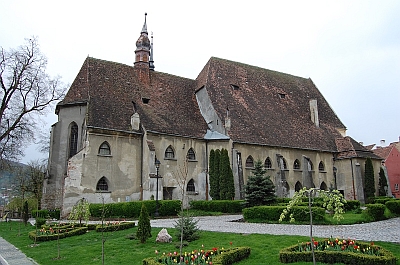 The Church of the Dominican Monastery

First attested in a document in 1298 as part of a Dominican monastic settlement, the church became the Saxons' main Lutheran church in 1556. The monastic complex demolished in 1888 and its place was taken by the present town hall. Only the church has remained from the original structure, built in late-gothic style typical of the hall-churches. 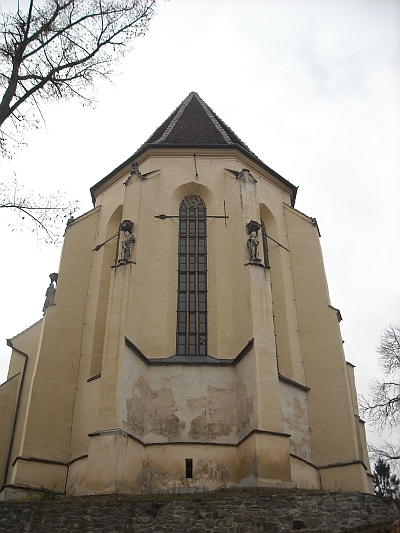 The Church on the Hill

To the north of the Clock Tower stands one of the most representative gothic-style structures in Transylvania, the Church on the Hill - so called because of its location on the School Hill (1,373 ft high). First mentioned in a document in 1345 and superposed on a former Roman basilica, its construction lasted almost 200 years. 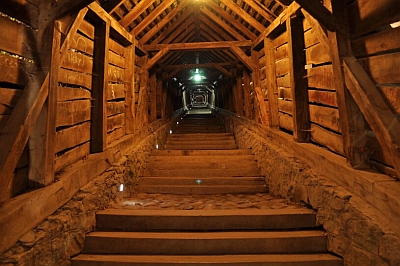 The Scholars' Stairs
Located at the end of School Street and connecting the Citadel Square with the Church on the Hill, the Scholars' Stairs, or Schoolboys' Stairs makes for an interesting piece of medieval architecture. Built in 1642, the covered stair-passage was meant to facilitate and protect schoolchildren and churchgoers on their climb to the school and church during wintertime. Originally, the stairs had 300 steps, but after 1849, their number was reduced to 175. 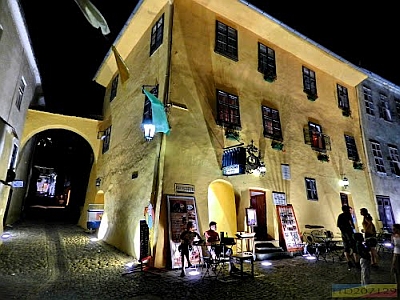 Vlad Dracul House
Located in the Citadel Square, close to the Clock Tower, it is the place where Vlad Tepes  was born in 1431 and lived with his father, Vlad Dracul, until 1435, when they moved to Targoviste. The ground floor of the house serves as a restaurant, while the first floor is home to the Museum of Weapons. 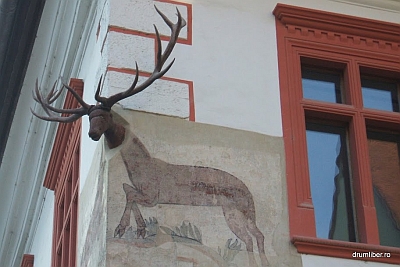 Built in the 17th century in Transylvanian renaissance style, the house draws its name from the stag skull set on one of the corners of its façade. Recent restorations revealed an external mural depicting the stag's body. Nowadays, the building houses a hotel, with a ground floor that doubles as a cellar bar. 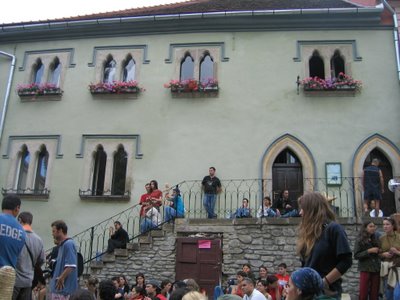 Built in the 16th century, the house was later restored in Venetian gothic style with the upper part of the windows forming a three-lobe arch.

Last but not least, let us remind you of the annual summerMediaeval Festival, when the old narrow streets of the Citadel are flooded with knights, monks, sorcerers, clowns and jesters, or embodied spirits, all emerging from the Dark Ages, when the fantastic and the supernatural fed the popular fear but also the unwearied penchant for adventure. 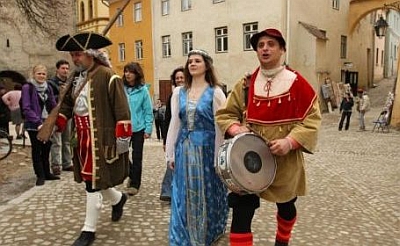